Actions Can Have Long Lasting Effects 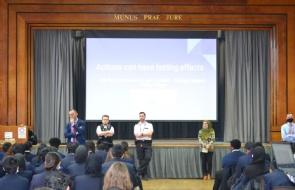 On Tuesday 8 February, Year 10 students were spoken to by the School Support Police Officers about thinking before they act.

There are times when a careless act can have a significant negative impact on students' life for years to come.  There are many examples of young people making a rash or ill-considered decisions can have impacts that are unintentional, accidental and serious in nature.  For example a play fight with another student, perhaps a friend can lead to injury and would be considered an assault, which could lead to a criminal records and long term ramifications.

The School Support Officers explained the consequences of their actions and to really think before they act.